On 21 March Professor Eldred Jones, Honorary Fellow, died peacefully at the age of 95.

Eldred arrived at Corpus from Sierra Leone in 1950 to read English. Born in 1925, the son of a Freetown customs officer, he witnessed at close hand three of the most momentous happenings in his country in the twentieth century: the Second World War, the transition of Sierra Leone from British colony to independent nation and the country’s fight for democratic survival during the insurrection of 1997.  Throughout this time, he played a leading role in building up tertiary education in the land of his birth, where for eleven years he held the post of Principal of the country’s main university, Fourah Bay College.  He proved himself to be an outstanding teacher, an efficient administrator, a conciliatory diplomat and a discerning literary critic. He was a Fellow of the Royal Society of Arts, recipient of the Royal Society of Arts Silver Medal and joint winner of the African Studies Association of the UK Distinguished Africanist Award.

In 2012, a record of the events in Eldred’s life, The Freetown Bond: A Life under Two Flags was published by James Currey.  He lost his sight in his middle years and the book, like all his later written work, was brought to the page by his wife Marjorie Jones. 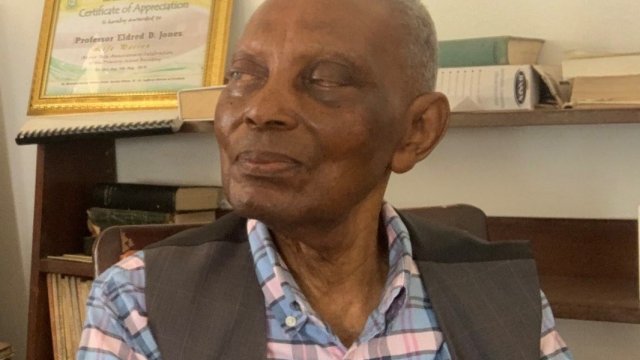 "Eldred Jones came across as a gentle, courageous, humane and civilised man, as well as a fine educationalist, a significant literary figure and a national icon."