The College is privileged to own a unique collection of Renaissance silver and gold plate.

This collection is a legacy of Bishop Fox and President Morwent and is a rare survivor from the English Civil War.

Of the ecclesiastical plate, the Founder's crozier, chalice and ablution dishes are on display at the Ashmolean Museum.

Important drinking vessels in the collection include a 17th century beaker, three ox-eye cups and a wide range of mugs and tankards wth capacity ranging from one half to six pints.

There is a superb Paul de Lamerie covered cup which was presented to the College by the Moseley family, plus several other important cups and trophies.

The role of silver in College life

Today we can enjoy an insight into how plate was used at the College in the past, because the purchase and repair of some pieces has been extensively documented – including three impressive late 18th century tureens, an early monteith, many tazzas and two argyles.

Certain items are associated with significant figures in the College's past, such as John Keble, or important silversmiths such as Omar Ramsden and Alwyn Carr. 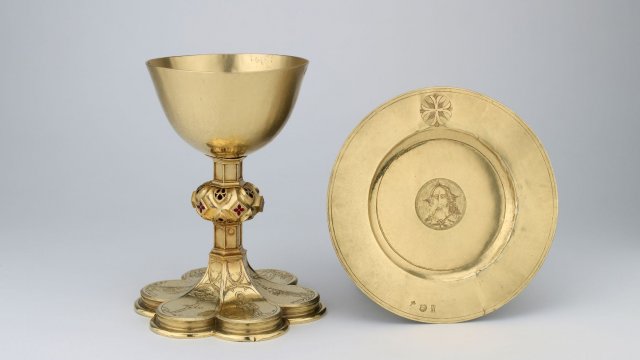