Sea creatures from the depths of the College

The cataloguing of our early printed collections sometimes throws up items of particular charm, betraying interests held by our early Fellows that strayed beyond their academic responsibilities.

The antiquary Brian Twyne (CCC 1594) was one such Fellow renowned for the rich variety of books in his library, and his copy of De aquatilibus by Pierre Belon (1517?-1564) recently caught my eye for several reasons. The book (shelfmark N.1.7) is a long octavo (this format being convenient for smaller illustrated works), and it is abundant with woodcuts, which have been hand-coloured.  Its rather battered leather binding betrays its appeal to successive readers over the centuries.

Pierre Belon belongs to the second stage of development in the study of fishes, following on from the observational work of Aristotle and Pliny; indeed he may be said to be the founder of early modern ichthyology, which was itself the first branch of natural history to be studied scientifically.  To some extent disregarding the work of the ancients, Belon and his 16th century contemporaries Guillaume Rondelet and Hippolyto Salviani studied, drew and described the water-dwelling species, laying the anatomical foundations for the early classification of fishes that would be continued by the encylopaedists Conrad Gesner and Ulisse Aldrovandi.

Born near Le Mans, Belon studied medicine at Paris, then botany in Germany with the physician and botanist Valerius Cordus.  On Belon’s return to France, he came under the patronage of François de Tournon, who funded his journeys in the eastern Mediterranean region where he studied the local flora and fauna for three years.

Belon’s first published work on aquatic animals was L’histoire naturelle des estranges poissons marins (Paris, 1551), which is the first printed book devoted to fish – although at the time, the term included any water-dwelling animal, including the dolphin and the hippopotamus.  This work formed the basis of the fuller De aquatilibus, published two years later and featuring in all about 110 species of fish, both fresh-water and marine, most of which are illustrated.  It is significant that Belon and his contemporaries published both in Latin and the vernacular, indicating that the audience for their work were the educated and aristocratic patrons of humanism, as well as physicians, naturalists, and natural philosophers.

Amongst the things for which De aquatilibus is notable, is the first lifelike and technically accurate drawing of a chameleon.  Earlier depictions in works such as Andrea Alciati’s Emblemata were not taken from life and more closely resemble a possum or a dog.  Belon captured precisely the chameleon’s unusual foot structure, and his became the standard depiction in zoological works for the rest of the century, including Gesner’s Historia animalium.

One of the most curious illustrations in the book, and one that caught people’s imagination when it was featured in a recent display in College, is the piscis monachi or sea monk.  To modern eyes, it appears to be a play on words, an amusing literal depiction of a monkfish.  On digging deeper, it transpires that there were supposedly real creatures known in the 16th century as the sea monk and the sea bishop.  Such creatures had featured in medieval bestiaries, possibly as an assimilation of ancient sea-gods into Christian iconography; belief in their existence was rooted in the folklore of medieval Europe, and nourished by sailor’s tales of the strange creatures seen on their tropical voyages.  Rondelet presented these monsters uncritically, including illustrations of the sea monk and bishop in his Libri de piscibus marinis (Lyon, 1554), with the caveat that although people who related such tales were apt to embellish the truth, he would make no attempt to affirm or deny the truth of the creatures’ existence.

Some of the fantastic creatures illustrated in books of the early modern period have since been revealed as man-made fabrications.  The skate or ray was for centuries modified and dried by sailors to create ‘mermaids’ and other creatures, known as Jenny Hanivers.  Composite forgeries were also created by sewing together separate animal parts, and these curiosities were much in vogue.  It has been speculated that as the underside of the ray naturally bears an uncanny resemblance to a bishop – with a human-like face, cope and mitre - any actual specimens of sea monks or bishops may have been the result of the doctoring of a single real animal.  Aldrovandi, whose own extensive ‘cabinet of curiosities’ included several such specimens, incorporated descriptions and illustrations of fake monsters into his Serpentum et draconum historiae (Bologna, 1640)

Belon’s depiction of the sea monk provides a fascinating insight into an intellectual world in transition.  Rigorous, objective approaches to the study of the natural world for its own sake were developing, alongside a persistent belief in the symbolic, spiritual or occult qualities of animals.  The choice made by Belon and his contemporaries not to eject dubious, fantastical creatures from their own published works reveals their trust in the scientific method, as well as something about their conceptions of logic, proof, and the notion of possibility. 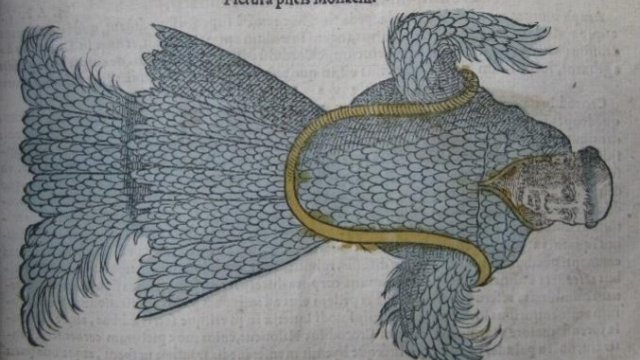 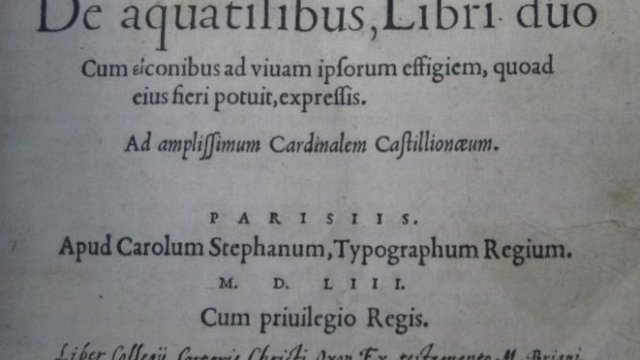 "Amongst the things for which De aquatilibus is notable, is the first lifelike and technically accurate drawing of a chameleon. Belon captured precisely the chameleon’s unusual foot structure, and his became the standard depiction in zoological works for the rest of the century."