In 1698 Chishull was granted permission by the college to travel. After preaching a sermon before members of the Levant Company he was offered the post of chaplain at their 'factory' or trading centre at Smyrna in Turkey.

Preaching a trial sermon was an important element of the competition for the chaplaincy, and as was the custom, the text of his sermon was subsequently published by the Company (we have two copies in the College Library). The post, which served both the factory and the local consul, included a generous income and fringe benefits such as a library, accommodation and meals.

Chishull may not have felt entirely at home in the English merchant community in Smyrna, as is revealed in a letter to President Turner, now preserved in the College Archives. When speaking of his possible successor, Chishull hints that despite the obvious benefits of the position, certain depths of patience and good humour would be required in order to tolerate the company of these ‘single men of uncontrolled liberty and violent inclinations, accustomed to getting, and bred up in the arts of gain’. During his time at Smyrna he visited Ephesus and Constantinople, experiences that inspired much of his later scholarship. Chishull’s greatest achievements may be considered his description of the Teian Diræ, and his deciphering of the Sigæan inscription called Bογετροφηδον.  The latter marble is now in the British Museum; despite Edward Harley's efforts, it was eventually given to Lord Elgin by the Sultan. 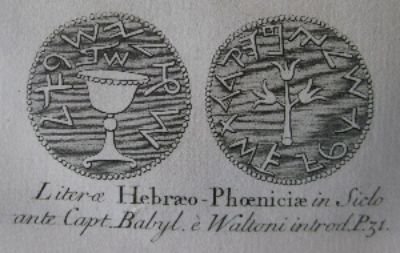 Chishull was not alone amongst Corpuscles in taking up a chaplaincy overseas: Edward Pococke and William Hallifax had been chaplains at Aleppo, and Chishull’s contemporary Basil Kennett (1674-1715), was chaplain to the English merchants at Livorno.  Kennett’s poor health (which, according to Fowler, was rumoured at the time to be due to ingestion of a slow poison) compelled him to return home after six years, but not before he toured Italy acquiring books, sculpture, and curiosities along the way. Chishull resigned his chaplaincy in 1702, returning to England with the household of Lord Paget, the English ambassador to the Ottoman Empire, which gave him the opportunity to visit much of Europe.  A 17th century Greek manuscript of Nicetas, Catena on the Psalms and Odes, which he probably got in Bucharest, was later lent to the botanist William Sherard and found its way into the Harleian collection (now BL Harl 5791).  Apart from this not much is known about Chishull's acquisitions during his years abroad.  In 1703 he was appointed lecturer of St Olave's in London, and a couple of years later, after marrying, he resigned his fellowship at Oxford. 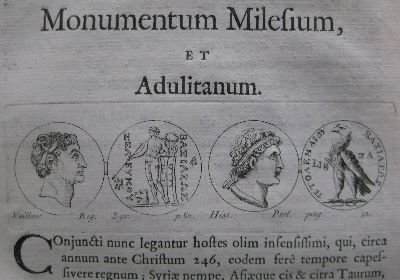 Following the death of President Thomas Turner in 1714, Edmund Chishull was made executor of Turner's will, and provided the inscription for his monument in Corpus Chapel. It appears likely that he was the preferred candidate for the Presidency, as the Senior Tutor withdrew from the ballot, apparently in his favour. However, it was Kennett who was elected to the presidency, only to have his tenure cut short by his own death from fever the following January. 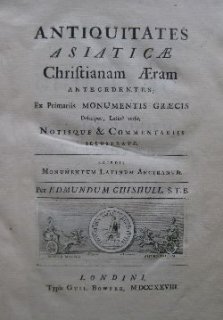 The first of Chishull’s studies of ancient history were published in 1721, and these were later collected in this handsome folio edition entitled Antiquitates Asiaticae Christianam æram antecedentes (1728). This volume also included some inscriptions copied by William Sherard whilst he was consul at Smyrna (1703-1716), and its publication was encouraged by Edward Harley. The publisher, William Bowyer, printed 100 deluxe copies on royal paper, and 400 copies on crown.  Corpus Library has one copy on large paper, and one copy of the ordinary edition.  Bowyer also published Chishull's Travels in Turkey and back to England, posthumously and by subscription, in 1747.  The Library of Corpus Christi College, Oxford, is named in the list of subscribers.

References
Oxford Dictionary of National Biography: entries on Edmund Chishull and Basil Kennett
Thomas Fowler. The history of Corpus Christi College with lists of its members (Oxford, 1893)
Natasha Glaisyer. The Culture of Commerce in England, 1660-1720 (Woodbridge, 2006)
Robert Walsh. An account of the Levant Company: with some notices of the benefits conferred upon society by its officers (London, 1825)
The diary of Humfrey Wanley, 1715–1726, ed. C.E. Wright and R.C. Wright (London, 1966)

"Chishull’s greatest achievements may be considered his description of the Teian Diræ, and his deciphering of the Sigæan inscription called Bογετροφηδον. The latter marble is now in the British Museum; despite Edward Harley's efforts, it was eventually given to Lord Elgin by the Sultan."