In 2018-19 Corpus Christi College was granted a generous donation by the Master of the Clothworkers’ Company.

Dr Carolyn Boulter, the then Master, is the wife of Hugh Boulter (CCC 1959) kindly provided funds for the conservation of material held in the Library’s special collections.

The treatment of these four volumes was carried out by Maria Kalligerou of the Oxford Conservation Consortium (OCC).  The College is a founder member of OCC, and the staff there help to take care of the College’s collections, providing professional advice and expert treatments.

The Corpus copy of this early work on botany has a 17th-century binding and hand-coloured illustrations throughout, including the title page. 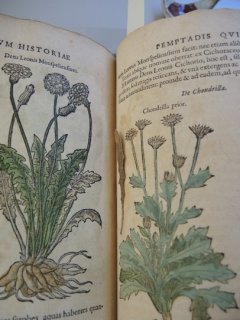 Dried or pressed leaves and plants have been tipped onto the text-leaves with paper tabs, often annotated. Three rather large specimens were loosely inserted in between text-leaves while elsewhere fragments were found in the gutter, in places where specimens were detached from their tabs. Part of the conservation treatment was to secure the specimens that were still attached using new paper tabs where necessary. 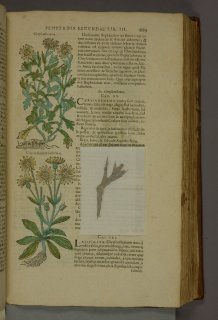 The loose specimens were protected by a custom-made folder created with archival tissue paper. Larger items were fixed on an archival-quality paper sheet with a tissue paper folder providing extra protection. All loose specimens remained in their original location with a few exceptions. 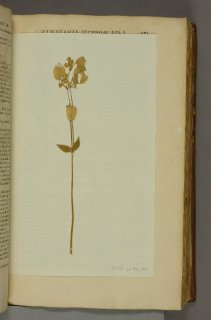 A detailed documentation sheet provides the location and description of each specimen. This is important for the safeguarding of the specimens during future handling as many are positioned close to the fore-edge and are at risk of being damaged while the pages are turned. Thirty-five specimens were listed when the volume was catalogued, but during the conservation treatment a few more were found in the gutter. The Initial location and identification of specimens was based on a list created by Anna Svensson, PhD student at KTH Royal Institute of Technology, Stockholm, November 2016. All leaves containing botanical specimens and paper tabs were digitised to further assist the use of the volume in the future.

This volume with a 17th-century binding was in good condition, except for the effects of some large flower petals, which had been inserted throughout the text.  These were loose and in danger of loss or damage, and a number of text-leaves had been extensively marked by petals that were no longer there. 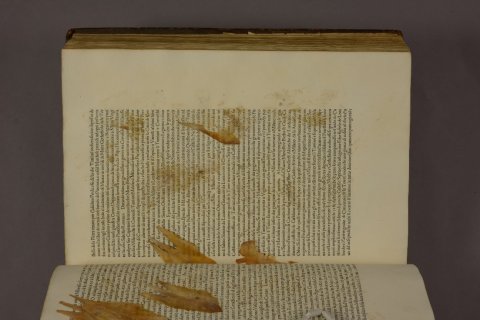 Loose petals in two locations of the volume were supported by an archival-quality paper sheet and further protected within an archival tissue paper folder. This was made to facilitate the consultation and handling of the very fragile petal specimens. Petals partly attached to the text-leaves or “trapped” in the gutter were left in place and fixed with new paper tabs were necessary. As this is a folio size volume, it was fitted with a Kasemake box and will be stored flat to minimise further movement and loss of specimens.

Catalogus horti botanici Oxoniensis by Philip Stephens, William Browne and William Hall (Oxford 1658). One of over 100 medical-related texts left to the Library in 1711 by William Creed (CCC Scholar 1676 and Fellow 1686).  Largely based on Jacob Bobart’s Catalogus plantarum horti medici Oxoniensis, it is the second part of the catalogue of “the trees and plants of the physick garden in the University of Oxford”.

This volume, in a 17th-century binding, has copious handwritten notes in a 17th-century hand, which demonstrate that this was a working copy.  The notes are presumed to be that of William Creed himself, and the inscriptions on the free endpapers reflect his observations: “Observ: of Plants: All plants whose flowers consist of four leavs are hot in their quality: All bulbous plants & most tuberose have six leaves in [th]e flower”.

The volume contained one botanical specimen, a flower, which was inserted within the text-block. A tissue paper folder was made to facilitate the handling of the specimen and for additional protection.

Within a month of the project being completed, a reader specifically requested to see books containing botanical specimens.  All the stabilisation work, and documentation, meant staff were able to provide safe access to this fascinating but vulnerable material, and thus assist a scholar with their research.

This 13th-century Bible had reached the College by at least 1600.  It has a beautiful 16th/17th-century Oxford binding of blind-stamped calf leather over thin wooden boards.  The upper board was almost completely detached, and only held on by the endleaf sewing.

The aim of the conservation treatment was to secure the board to the binding while retaining and preserving this stitching.  The board was reattached with hinges made with conservation-quality material (aerocotton and Japanese paper), pasted under the leather binding.

The secure attachment of the board to the binding was important for reducing the risk of abrasion of the illuminated initial on the title page, as well as minimising the intrusion of dirt into the text-block. 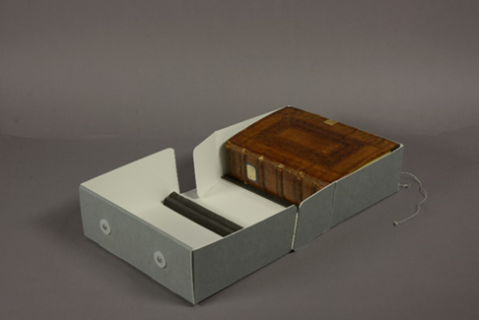 All four volumes were fitted with bespoke boxes made with acid-free card, which provides extra storage protection.

Dr Carolyn Boulter wrote an article for the Sundial December 2019 issue.  The article is called Looking after the Library's Horticultural Collections. 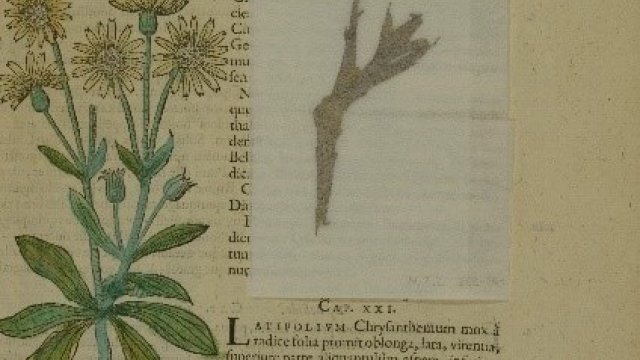 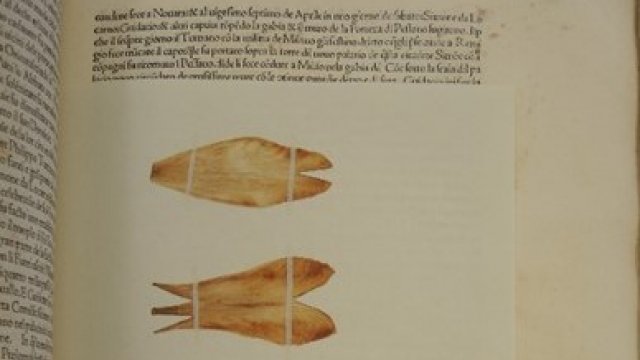 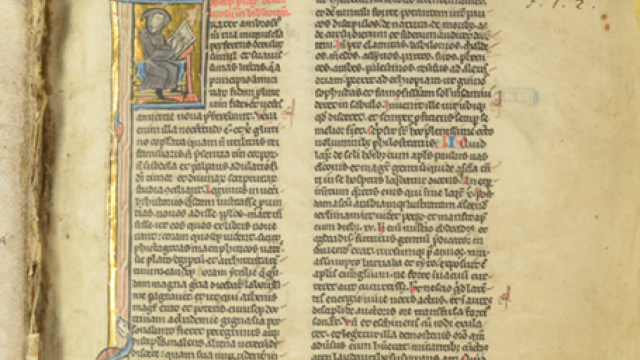 "The most widely used botanical reference work for a hundred years before Linnaeus introduced the binomial classification system using morphology was the work of Rembert Dodoens (1517 to 1585). The Corpus copy was published in Latin in 1616 and was presented to the College by William Clayton in 1667."