A binding fit for the Black Prince

A generous and unusual gift to the Library was presented Old Member John Scott (CCC 1956), in appreciation of the friendship and kindness of former president Professor Richard Carwardine.

This visually arresting piece is an example of a deluxe publisher’s binding of the mid-19th century, featuring moulded and pierced covers over a red underlay.

The text of the book is A record of the Black Prince by Henry Noel Humphreys, lavishly illustrated in both black and white and colour. The design for the cover was taken from one of the compartments of the Black Prince’s tomb at Canterbury. 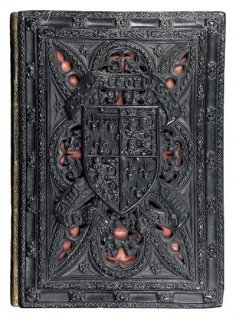 This tactile and highly-decorative style of binding was popular on gift-books from the mid-1840s to the 1860s. Reminiscent of medieval sculpture, hand-carved ebony or even cast-iron, it is the embodiment of the Victorian Gothic Revival style in arts and crafts. Known as papier-mâché, or carton pierre bindings, the boards were machine-made using a plaster and antinomy mixture combined with or applied over papier-mâché, then pressed over metal frames or into moulds. The patent for this process was held by the firm J. Jackson & Son, who also produced architectural mouldings for furniture, picture frames, carriages, and so on. The actual binding process would have been undertaken by trade binders, in editions of at least 1,000, as it was an expensive process and therefore necessary to produce quantities that could recoup the cost of productionThe technique is especially associated with the British graphic artist, writer and antiquarian Henry Noel Humphreys (1807–1879). He had travelled extensively in Italy during the 1830s and was deeply influenced by the art, particularly the illuminated manuscripts, he had seen there. On his return to England he published widely and experimented with lithography and calligraphy. Inspired by the look and feel of both manuscripts and early printed books, he utilised chromolithography in his publications in an attempt to recreate the singular composition of text, illustration and ornament found in early books, that was missing from the mass-produced books of his own era.

As Humphreys put it in the Preface to A record of the Black Prince : “In order to give as much as possible of the original 'old book' charm to these passages from the chroniclers, they have been carefully printed, with suitable 'rubrics' in black letter, from old type that appears to have been actually used by ... the celebrated Caxton ... A massive carved binding has been added in order that the volume may convey, as completely as possible, the impression of one of those richly embellished books of chronicles that form the gems of some of our greatest public and private libraries."

There are two copies in the Bodleian Library, but ours is the only copy so far catalogued for any of the Oxford colleges. Given the personal nature of the gift-book, it would be natural for them to remain in private ownership. We are very grateful for this remarkable addition to the Library, which will be kept safely with our early printed collections. Once the planned new library with its dedicated exhibition space has been constructed, A record of the Black Prince would be a natural and striking item for display.

Further examples of books with papier-mâché bindings can be seen on the British Library’s Database of Bookbindings (search using keywords ‘papier mache’): http://www.bl.uk/catalogues/bookbindings/Default.aspx

John Scott generously presented two further exemplars of this carved Gothic style of bookbinding from John Scott. The first is another example of Henry Noel Humphreys’ work – Coinage of the British Empire printed in 1855. Featuring a similar papier-mâché style, the covers depict the reverse side of a gold sovereign from the reign of Henry VIII. The book itself contains many chromolithographic illustrations of British coins. The second volume is a rare survival of a process developed by the binders Remnant & Edmonds of heat-stamped and chromolithographed wood. The work is The preacher (printed in 1849 by Longmans), a highly decorative volume with text taken from the Book of Ecclesiastes from the King James Bible of 1611. The design of the illuminations, and indeed the book as a whole, is by Owen Jones, renowned architect and design theorist, and great proponent of the chromolithographic process.

"This tactile and highly-decorative style of binding was popular on gift-books from the mid-1840s to the 1860s. Reminiscent of medieval sculpture, hand-carved ebony or even cast-iron, it is the embodiment of the Victorian Gothic Revival style in arts and crafts."