Congratulations to Kathryn Stevens and Beppe Pezzini, who have both been awarded 2021 Philip Leverhulme Prizes in Classics. Only five prizes a year are awarded in Classics and it is, therefore, a great achievement for two Corpus Fellows to be recipients in one year.

Now in its twentieth year, this scheme commemorates the contribution to the work of the Trust made by Philip, Third Viscount Leverhulme and grandson of William Lever, the founder of the Trust. The prizes recognise and celebrate the achievement of exceptional researchers whose work has already attracted international recognition and whose future careers are exceptionally promising.

Kathryn Stevens, Associate Professor of Ancient Greek History, won the award for her work on ancient history; Greek, Mesopotamian and Hellenistic.  She says, ‘It is an honour to be among the recipients of this year’s Philip Leverhulme Prizes. I am very grateful to the Leverhulme Trust, and to colleagues in Oxford and elsewhere for their collaboration and support.'

Beppe Pezzini, Associate Professor of Latin Languages & Literature, won the award for his work on Latin Literature, Greek and Roman drama, Latin linguistics, medieval Latin, reception, history of classical scholarship, digital humanities and theory of fiction.  Beppe will use his prize to complete a series of projects on Roman Republican Literature, including on the special relationship between Rome and the Hellenistic Kingdom of Pergamum, the African-born Latin playwright Terence, and the fourth book of Lucretius' philosophical poem De Rerum Natura. He says, “The Roman Republic (3rd – 1st c. BC) is a fascinating period which is still largely approached from the biased perspective of canonical classical literature, even if crucial issues such as the relationship between Roman and Greek culture and identity, to name just one, are shaped at this time.”

For more information about the Leverhulme Trust Prizes click here. 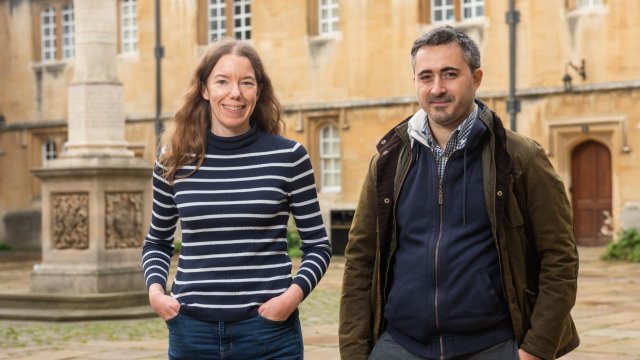 “A Leverhulme Prize is a great distinction. For a single institution, let alone College, to win two in the same category and year is extraordinary. The two are eminently deserved and a great tribute to the innovative intellectual depth and breadth of Classics at Corpus.”