Recognition of Distinction for Corpus Fellow

Congratulations to Pawel Swietach, who has been awarded the title of Professor of Physiology in the University’s 2020 Recognition of Distinction exercise.

Professor Swietach has been Handa Fellow and Tutor in Physiology at the College since 2010. He first came to Oxford's Department of Physiology, Anatomy and Genetics (DPAG) to study a BA in Physiological Sciences, achieving a First Class Honours, before undertaking a DPhil in Physiology on “Factors affecting the spatio-temporal distribution of protons and their permeation across the gap junction in cardiac myocytes."

As a postdoctoral researcher, his research began focusing on how changes in pH influence calcium signalling, a key driver of cardiac physiology, before being awarded a Royal Society University Research Fellowship (URF) to study spatio-temporal aspects of pH control in cancer, and how acidic pH affects cancer cell behaviour and disease progression.

In 2011, he became Associate Professor in Cardiovascular Physiology at DPAG. In 2017, he was awarded an ERC Consolidator Award to expand his research in the area of acid-selection in colorectal cancer. In that same year, he began leading a BHF Programme on the role of acidity in hypertrophic cardiac growth, which often precedes heart failure. 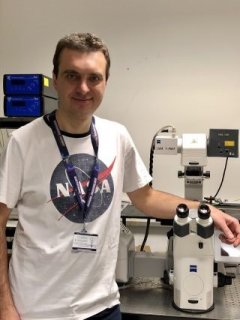 On receipt of his conferral, Professor Swietach said: “I have never had a boring day studying physiology. Looking ahead, there’s never been a better time to be a physiologist because ultimately, all biomedical discoveries must be placed in the context of systems, big and small. I’m excited to be conferred the title of Professor of Physiology. Although this is a personal award, it would not be possible without the students, postdocs, colleagues, mentors, as well as professional services staff I have the privilege to work with in our community.”

"I think it is time to publicly admit that I love physiology. Its proud history caught my attention early in my undergraduate studies. Its breadth gave me opportunities to perpetually explore new challenges. Its obvious link to health and wellbeing is my chance to make an impact. Its clarity in complexity gives me confidence in what I’m trying to explain."