Team Captain Tyron Surmon explains how the team was selected: “We set a 150-question written test for applicants for this year's series and those with the highest scores were invited to take part in a final selection with buzzers. We were delighted when we heard that we were one of the 28 teams to get through the BBC’s rigorous selection process.  From that point preparation was taken very seriously, with three practice sessions held each week.”

He goes on to describe the day of filming: “I found the experience very stressful.  Once our makeup was done, we waited with the Bristol team.  It was a strange atmosphere. Filming is done without interruption and it is very, very different answering questions in the studio under those conditions.  Bright white lights shine in your face and the sound of the audience makes it hard to hear the questions.  The game went so quickly, it felt more like ten minutes than half an hour.”

The second round match was originally going to be filmed in March, but, owing to Covid, it has been delayed until September.  Tyron, unfortunately, has therefore had to pull out because he is in the USA but the rest of the team remains intact and we wish them the very best of luck.

If you missed the match on 24 September, it is available to watch on BBC iPlayer. 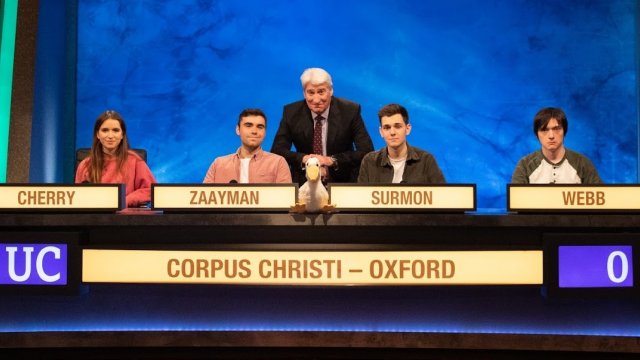 “The Corpus team is very strong this year. When we were last on TV in 2016 we got to the quarter-finals, and I have a good feeling that maybe we'll beat that this time round"