Struan Murray and his editor Ben Horslen of Puffin have won the 2021 Branford Boase Award, given to the author and editor of an outstanding debut novel for children.  The award celebrates Struan’s ambitious, beautifully written fantasy adventure Orphans of the Tide.

The Branford Boase is named for author Henrietta Branford and Wendy Boase, a co-founding editorial director of Walker Books. The award program was established in 2000 to recognize emerging talent in young people’s literature. The award is made annually to a first novel of at least 6,000 words for readers aged seven and older.

When asked about his inspiration for Orphans of the Tide in an interview for the Reading Zone website, Struan said: “It began in 2015 when I was searching for story ideas, and scribbled a doodle of a whale on a rooftop.  I was captivated by the idea: how did the whale get there, and why, and what would happen if it died?  A few gruesome YouTube videos later, I learned that when whales die on land, they build up with gas, until eventually the pressure is too great.  I knew exactly how I wanted my story to begin: with the threat of an exploding whale.

At the same time, I had been toying with another idea, about a young, Da-Vinci-like girl inventor, only I couldn’t find my way in to the story.  With this new idea, I realized I would need a character with enough ingenuity to cut the dead whale open to stop it from exploding.  So I joined the two ideas together to create Ellie Lancaster, a young inventor living in a drowned city, where whale swim through the submerged streets.”

Struan joined Corpus in 2015 as a Junior Research Fellow in Biochemistry.  He now holds a lectureship, teaching molecular and cellular biology to the undergraduate biochemists and medics. His research focusses on how non-coding RNAs regulate the way in which genes are transcribed, bringing about fundamental changes in gene behaviour.

The sequel to Orphans of the Tide,  Shipwreck Island is also published by Puffin/Penguin.

To read the full interview with Struan click here. 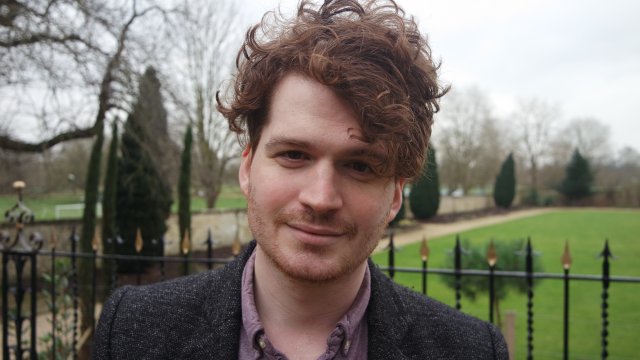 “One of the best things about the Branford Boase Award is that it celebrates not only the author but the editor too, and understands and recognises that writing is a collaborative process that wouldn’t be possible without the commitment, imagination and skill of the editor.”